NO SALES TAX - NON-CALIFORNIANS FREE DELIVERY FOR ALL TRAMPOLINE ORDERS

Loading...
x
Price:
Actual Price:
Our price is lower than the manufacturer's "minimum advertised price." As a result, we cannot show you the price in catalog or the product page.

You have no obligation to purchase the product once you know the price. You can simply remove the item from your cart.
Our price is lower than the manufacturer's "minimum advertised price." As a result, we cannot show you the price in catalog or the product page.

You have no obligation to purchase the product once you know the price. You can simply remove the item from your cart.

How to Games for the Trampoline....

Jump Into The Summer With These Fun Games.. 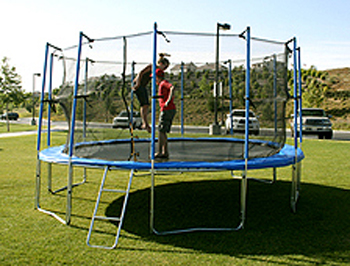 RING AROUND THE ROSY... A fun version of the game played on the ground. Form a circle in the middle of the trampoline. Can hold hands, or walk around in a circle. Chant, "Ring Around the Rosy, a Pocket Full of Posies, Ashes, Ashes, We all Do A ________________." Each person takes a turn picking the way you should fall down. Examples include: Bottom drops, knee drops, backwards drops, etc. You can get even more creative by doing animal drops, airplane or train drops, and more. **Recommended for little jumpers up and 3 or more people.

HOT POTATO... Four jumpers are on the trampoline. All players must be jumping at all times. A soft ball is thrown between players. Players must catch the ball. If they drop it, fail to catch it, or stop jumping to catch the ball they are out. Play continues until there is only one player left. **Recommended for players 5+ with a minimum of three players. Four or more is most recommmended.

CRACK THE EGG.... All players are up on the trampoline. One player is chosen to sit in the middle of the players who have formed a circle around her. The player in the middle sits with knees drawn to chest and arms around her knees. Players jump around her until she "cracks" or releases her arms from around her legs. **Recommmended for ages 5+ with a minimum of three players.

SPRINKLER... Place a sprinkler underneath the trampoline. Have children bounce on top. Lot's of fun when the summer heat makes the trampoline HOT! **Recommended for bouncers ages 4+ with a minimum of one jumper. Although it's funner with two or more!

GAME PACK... It includes a book with over 20 trampoline games to play for one player or more that help build endurance, stamina, and balance. In addition to the book, it comes with 3 squishy balls, 4 shock cords, and 1 box of sidewalk chalk. . **No recommended ages were given on website description.

GO CAMPING...Pick your budget and enjoy a night of backyard camping on your trampoline. Grab the whole family and head to the backyard to spend the night in this sturdy, weather resistant tent that fits over the entire trampoline! Definetely the king of all trampoline tents. **Recommended ages: 3+ with parent supervision.

HOPPY BALL: Get hopping! This ball is specially designed for use on the trampoline. Sit on the ball, and start hopping! . Use only on enclosed trampolines. **Recommended ages 5+, one jumper or more. Maximum two bouncers at a time.

Top
Processing... 0 item(s) in your cart